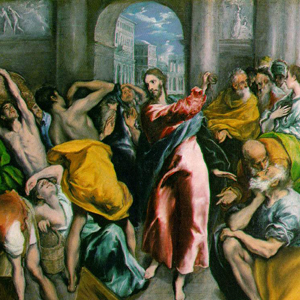 This opposition led him to go into the temple and disrupt the animal sacrifice business. Shortly thereafter he was crucified by the Romans, doubtless because of his actions in the temple. Christians often remember the incident in the temple as “Jesus drives out the dishonest money changers,” but it is clear from both the gospels as well as the history of Christianity that the money changers had little to do with it. It is one of the few incidents in Jesus’ life that is found in all four gospels (Matthew 21:12-13, Mark 11:15-17, Luke 19:45-46, John 2:13-17). END_OF_DOCUMENT_TOKEN_TO_BE_REPLACED 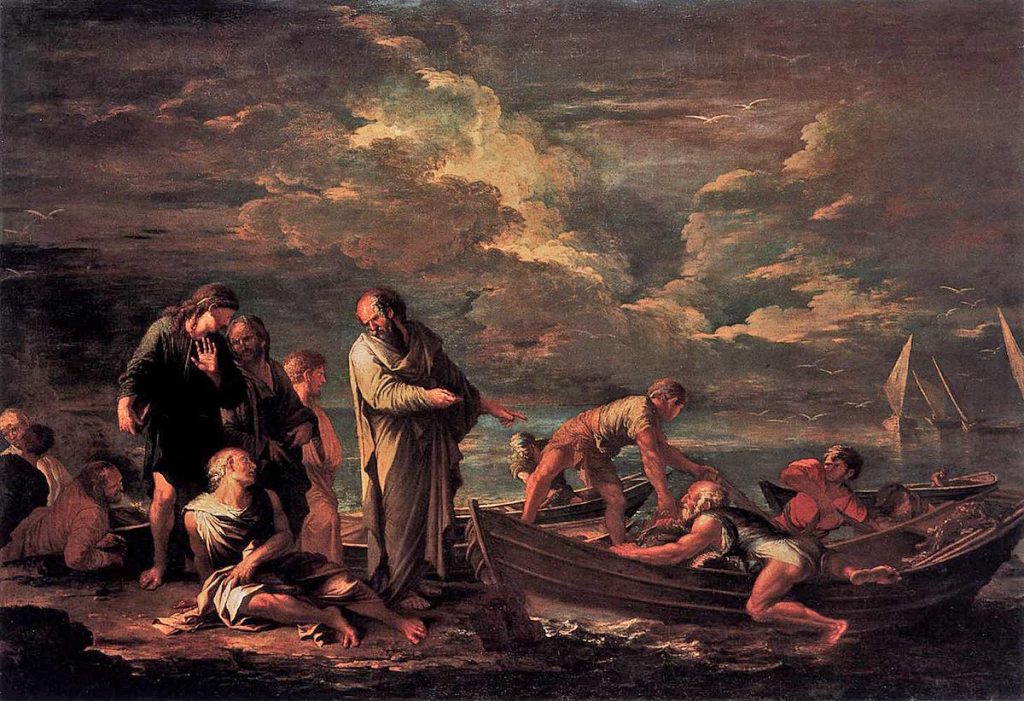 The historical Jesus, as I’ve argued elsewhere, was clearly vegetarian. To recap:  (1) The controversy in the early church over vegetarianism shows that the leadership of the early church promoted vegetarianism and opposed animal sacrifice. (2) The testimony of later Jewish Christianity echoed and preserved this vegetarian, anti-sacrifice tradition. (3) Jesus himself was killed after disrupting the animal sacrifice business in the temple. But can we say that Jesus was a vegan? This is somewhat trickier. END_OF_DOCUMENT_TOKEN_TO_BE_REPLACED The dispute over vegetarianism in the early church shows that the leadership of the Jerusalem church was vegetarian. END_OF_DOCUMENT_TOKEN_TO_BE_REPLACED

What role would an Ebionite Christian Church play — why would anyone want to form one at all? The main reason is to provide a place for ethical vegetarianism in Christianity. The Ebionites, whatever else you may say about them, believed that vegetarianism was part of the gospel message. When Epiphanius asks an unnamed fourth-century Ebionite why they abstain from meat, when meat-eating is in the Bible, the Ebionite responds, “Christ revealed it to me.” END_OF_DOCUMENT_TOKEN_TO_BE_REPLACED

A reader of this blog recently asked, “When are we going to form the ECC (Ebionite Christian Church)? Or maybe EUC, Ebionite Universal Church?” Many vegetarians and vegans who come from the Christian tradition find that there isn’t really a Christian church, group, or denomination, which it makes sense to join. So why not form our own? Here are my thoughts.

END_OF_DOCUMENT_TOKEN_TO_BE_REPLACED Christianity was shattered into many different factions at an unusually early stage. Bitter disputes are recorded in Paul’s letters between Paul and Peter and James. You can’t read the collection The Ante-Nicene Fathers without seeing that much of early Christian literature is polemical. It is directed, not against external enemies, but against other followers of Jesus who are “misrepresenting” Christianity.

Irenaeus, Hippolytus, Tertullian, Epiphanius, and Theodoret wrote lengthy refutations of their Christian opponents. Origen ruefully comments that “many” Christians have differences of opinion on “subjects of the highest importance.” This is totally unlike what we see in Buddhism, Islam, or even modern Christianity, where all the various schools of thought resemble each other in broad outline. In early Christian writings, we sometimes see Christian polemics against Jews or pagans; but it is not nearly as voluminous as the polemics against other Christians.

What do scholars make of the huge multiplicity of different Christian groups? For example, what caused it? Any ideas, scholars? Or anyone else? END_OF_DOCUMENT_TOKEN_TO_BE_REPLACED

My new book, Disciples: How Jewish Christianity Shaped Jesus and Shattered the Church (Apocryphile Press, 2013) has now been published. You can order it on Amazon here. (I will not be selling it through my website.)

A book about the disciples of Jesus would typically start with Jesus himself: first there was Jesus, then he had disciples. Disciples suggests a fundamentally different story: first there was a movement, then Jesus emerged as its leader. This movement was markedly different from both rabbinic Judaism and gentile Christianity. It became known to history as “Jewish Christianity”— Jews who followed both Jesus (as they understood him) and the Jewish law (as they understood it).

These first disciples affirmed simple living, nonviolence, and vegetarianism, and rejected wealth, war, and animal sacrifices. Some two decades after Jesus was crucified, they split with their most famous missionary, Paul, over the issues of vegetarianism and eating meat from animal sacrifices. These events become clear through examination of the letters of Paul and the Jewish Christian literature: the Recognitions, the Homilies, and testimony about Jewish Christianity in the early church fathers. The history of Jewish Christianity takes our understanding of Christian origins into a completely new realm. END_OF_DOCUMENT_TOKEN_TO_BE_REPLACED One might conclude from the title and the motto that Zealot would be a rehash of the “Jesus as violent revolutionary” idea. S. G. F. Brandon, Robert Eisenman, and others have all made the case that Jesus was a militant Jewish nationalist. But Aslan’s book is more sophisticated than this; Jesus was a “zealot” with a lower-case “z,” not a member of the Zealot party. END_OF_DOCUMENT_TOKEN_TO_BE_REPLACED

Such a book is Reza Aslan’s Zealot: The Life and Times of Jesus of Nazareth (Random House, 2013).  This book is sufficiently interesting that I will devote two blogs to issues which it raises, even though there is no mention of vegetarianism or the Ebionites.  In this first one, we’ll look at the incident in the temple, to which Aslan attributes central importance.  In the second, we’ll look at the early Christian attitude towards war. END_OF_DOCUMENT_TOKEN_TO_BE_REPLACED

Well, surprise, surprise! According to a recent archeological report, the ancient temple in Jerusalem was a slaughterhouse that powered the local economy. The animals sacrificed came from both near and far away, which “confirms visions of the temple depicted in historical Jewish texts and suggests the economic heart of the city was its slaughtering operation.”

The Journal of Archeological Science, in the December 2013 issue has an article on “The pilgrimage economy of Early Roman Jerusalem,” by Gideon Hartman, et. al., which (despite the date) is evidently already available. You can find the abstract online (scroll down to see abstract). What is new in this report is not the ancient testimonies pro or con on animal sacrifice, but that modern evidence supports the idea that animal sacrifice was a key part of the first century Jewish economy. END_OF_DOCUMENT_TOKEN_TO_BE_REPLACED

The San Francisco Vegetarian Society has now uploaded the YouTube video of my talk, “Vegetarianism and Christianity — Why Don’t They Mix?”  This talk was given on Sunday, October 7, 2012, in San Francisco at the World Vegetarian Festival.

Let me know what you think. The Gospel of Jesus’ Wife (as King has named it) is very short and very fragmentary.  END_OF_DOCUMENT_TOKEN_TO_BE_REPLACED

If you want to promote vegetarianism among Christians, there are basically two schools of thought.  (1) Some people cite the Bible, admit that Jesus wasn’t vegetarian (Luke 24:42-43), but say that vegetarianism is still a good idea because it is the original best diet for humans (Genesis 1:29), and Jesus wouldn’t like factory farming even if he ate meat.  (2) Others cite historical evidence and argue that Jesus disrupted the animal sacrifice business in the temple (Matthew 21:12-13, John 2:13-16 and parallels), was vegetarian himself, and taught vegetarianism (the views of James in apostolic times, and the Ebionites thereafter). END_OF_DOCUMENT_TOKEN_TO_BE_REPLACED