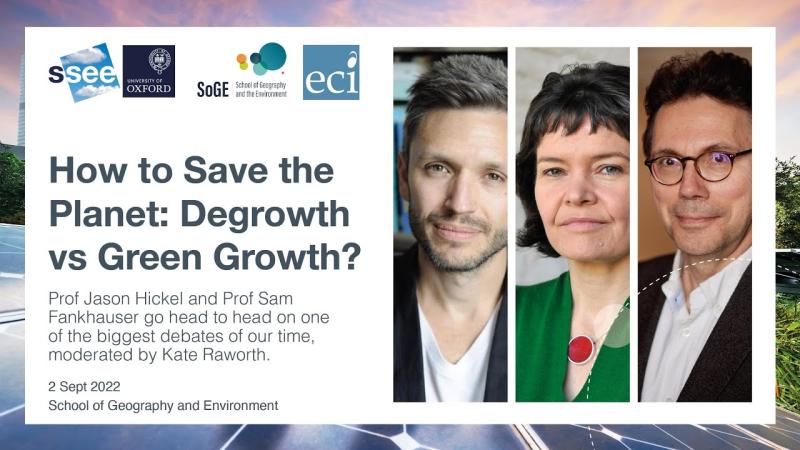 To save the planet, should we seek more economic growth, but just make sure that it respects planetary boundaries (“green growth”)? Or is there no alternative except to decrease total economic activity (“degrowth”)? About two weeks ago there was a fascinating debate on this critical and controversial topic now available on YouTube, which I recommend to everyone interested in what it’s actually going to take to deal with climate change. This is certainly an all-star cast—Jason Hickel, Sam Fankhauser, and Kate Raworth are all committed environmentalists and knowledgeable economists.

What do you think? Please feel free to make comments below. I have a few random thoughts but this isn’t a comprehensive analysis of the debate.

1. I was impressed by both speakers. My own position (as regular readers of this blog can probably figure out) is closer to that of Hickel: the economy, in sheer physical terms, must get smaller. Hickel is a very impressive speaker, and his introductory remarks were stirring and inspiring. However, Fankhauser was also articulate and made a number of excellent points, to which Hickel did not entirely respond. Fankhauser argued that we will need investment for the massive buildout of renewables which will be required, and that the politics of degrowth is absolutely disastrous—nobody wants the economy to contract, which we associate with recession, depression, or worse, so it’s going to be impossible to sell to the public.

2. There was zero discussion of plant-based diets, livestock, veganism, or agriculture. Fankhauser, though, gets some bonus points for mentioning land use: growing trees would naturally sequester huge amounts of carbon. However, he points out, we would have to insure that reforested areas remain forested; it doesn’t do any good to grow forests and then cut them down again. The follow-up question which no one asked would be: where can we find the land to grow these forests? (Answer: from lands now devoted to livestock.)

3. Also surprising was that neither speaker really questioned that modern renewables like solar and wind could replace fossil fuels, and that all we lack is the political will. The assumption they’re evidently making is that because the prices of renewables are coming down, that means renewables are already feasible and are becoming more so every day. This is highly questionable, as I’ve indicated elsewhere.

Thoughts on this debate, anyone?