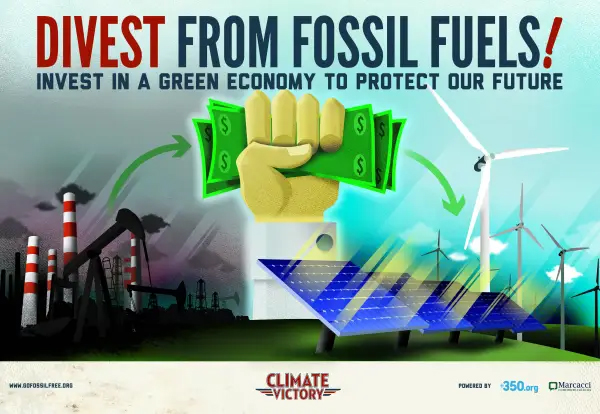 This is actually an interesting idea because it represents something concrete that we can do. But how is this strategy supposed to work? If we are successful, what does this look like? The strategy seems straightforward enough: convince enough people, and enough banks, not to invest in fossil fuels, and presumably the oil and coal companies will go out of business. And then what? Divestiture is a good start and a tactic that we can grasp. But I would like to see just a bit more detail here.

Here’s the detail that’s missing: this means a MUCH smaller economy. Ultimately, this will mean an economy perhaps half the physical size of the current one, or even smaller. This may not be a popular move politically! We can ameliorate this situation by radically redistributing wealth, but that’s a second revolution—a social revolution—on top of the environmental revolution.

To go to 100% renewables for ALL energy and still provide our current level of energy use isn’t really possible. Point number 1, this requires a massive increase (fourfold or fivefold?) in the electric grid, since now most U. S. energy will be electrical energy, whereas energy consumption in the U. S. right now is about 80% from fossil fuels.

Point number 2, this also means electrifying transportation. This is a huge infrastructure investment. Electric cars are possible, but there are serious technical difficulties with electric trucks, because the batteries might have to be almost as big as the whole truck. Point number 3, you need huge quantities of energy storage for when the wind doesn’t blow and the sun doesn’t shine. Point number 4, electricity doesn’t work very well at providing the high temperatures for heavy industry like steel production. Point number 5, many renewables require “rare earth minerals” such as neodymium and dysprosium, which are in scarce supply, and also needed for information technology, as well as consumer devices such as cars, washing machines, and refrigerators. Point number 6, even if renewables work like a charm, because of sulfate aerosols they will temporarily make global warming worse.

Climate is not even half of our environmental problems! What about peak oil, biodiversity collapse, mass extinctions, soil erosion, groundwater depletion, emerging infectious diseases, and pollution? We’ve exceeded planetary boundaries on numerous points.

So, sure, by all means let’s have divestiture, but let’s be honest with each other, and the American public, about what this means. Divestiture is a good start; it’s a tactic that we can actually grasp and carry out. We need more. The economy needs to be smaller—a lot smaller. That’s what we need to be talking about.

6 thoughts on “Why divestiture?”