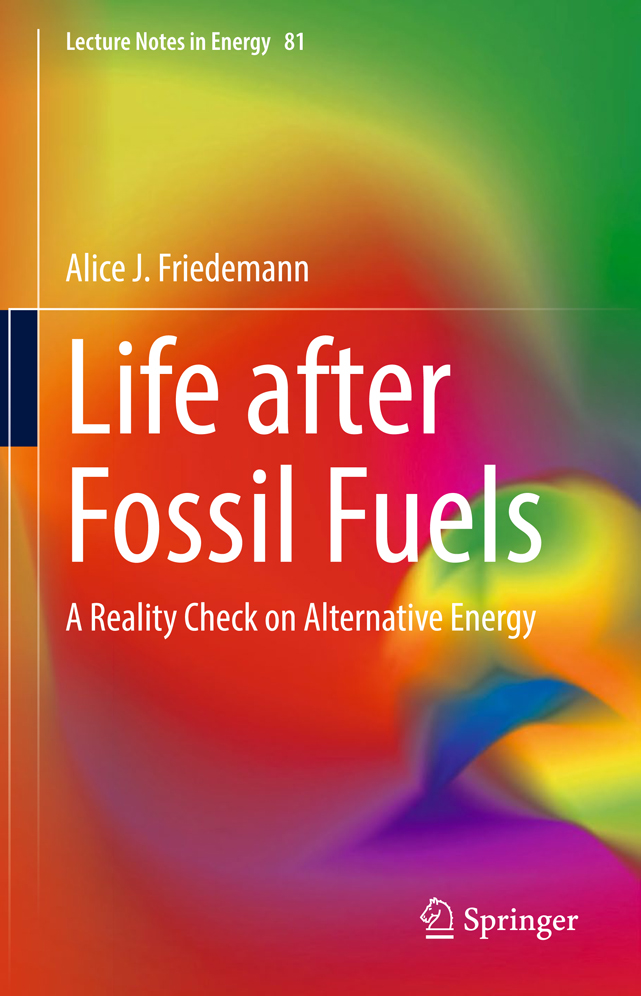 Most people assume that when fossil fuel use ends, we will probably be living with different types of renewable energy, mostly wind turbines and solar power. Allow Alice Friedemann (engineer, architect, and creator of EnergySkeptic.com), to puncture a few of your illusions.

I loved this book. Probably not everyone will be as nerdy about energy issues as I am, but for me it was just what the doctor ordered. Realistic, humorous, objective, this book is oddly hopeful in an apocalyptic sort of way. Alice Friedemann shows us that there is life after fossil fuels, even after the failure of all our dreams about alternative energy, and as industrial civilization crashes down around us.

Her topic is energy, so she doesn’t discuss veganism; but she does discuss agriculture. Agriculture (spoiler alert!) is where we’re going to get our alternative renewable energy.

The book also has an index, unlike some other books (cough, cough) which I could name. The most serious negative for the book is the price. As of mid-2021, the hardcover version is going for $128! Or you could get the Kindle e-book version for a mere $42. Yikes, who can afford that! This exorbitant price suggests that the publisher thinks that this book will only be read by scholars and bought by libraries. So, taking this cue, do what I did: visit your friendly public library and request a copy via interlibrary loan (if they don’t have it, and they probably won’t). If you’re rich, however, buy ten copies and donate them all to local libraries.

Declining energy supplies, due to declining fossil fuels, is a more serious problem than climate change. Climate change is an existential threat — no doubt about that — but “ultimately, energy decline will mitigate climate change more than all [other] approaches” (p. vi). Fossil fuels are going to decline anyway; peak oil is already here, and most climate models don’t incorporate this decline into their calculations. And, renewables aren’t going to work nearly as well as everyone seems to think. No matter which way you cut it, there will be less energy in our future. Welcome to the energy descent.

Friedemann’s analysis of renewables is rather different from that of other informed writers in several ways. Most renewable energy skeptics start by looking at energy supply (how will renewables generate electricity) and then move forward to how we would use it. Friedemann works in the opposite direction — starting with “what do we need it for?” and then working backwards to “how would we acquire it?” This leads her to put manufacturing and transportation front and center in the discussion. And, another plus, it’s not all doom and gloom! There is an answer to our energy crisis, and that answer is wood.

Wood!? But there isn’t enough land to grow all the forests we’d need to power industrial civilization! In the Middle Ages, with just a fraction of today’s population and a much lower standard of living, there were wood shortages! Hang on: Friedemann knows all that. The basic solution is population reduction. “We need to put population discussion back on the dinner table . . . One way or another, declining fossils will mean a much lower human population.” (p. 194)

Why wood, and not renewables like solar and wind? Renewables only create electricity, and electricity is an awkward way to power transportation. You’ll need batteries, but batteries are bound to be much less energy-dense than oil in your gas tank. So, we have a weight problem to begin with; any truck running on batteries would have most of its weight in batteries, with very little (if any) left to actually carry goods. (Her previous book was When the Trucks Stop Running.) A catenary system (overhead wires) would require huge overhead and massive costs, and even if it were implemented, the most important uses of trucks are off-road and will be impossible: “No farmer, no miner, no logger, and very few truckers will ever go catenary” (p. 49). So right at the start we have issues: even if we have plenty of renewable electricity, it won’t work very well for much of our transportation needs.

But the real killer is her discussion of industrial processes. A huge part of our energy use is manufacturing, which is “the Godzilla of energy users” (p. 60), consuming more than half of all fossil energy use. Friedemann argues that we are using the wrong yardstick when we ask whether the renewables can generate electricity at the same price as fossil fuels, so-called “grid parity.” We need something stronger: we need “thermal parity,” the ability to create high heat up to 3000 degrees F for industrial processes (p. 54).

Many manufacturing processes require temperatures up to 3000 degrees F. How are we going to generate industrial heat from renewable electricity? It is three times more efficient to create heat directly from fossil fuels than with electricity. Theoretically, you could use electrolysis to split the hydrogen from oxygen in water, then burn the hydrogen to create the industrial heat. BUT you are talking about a lot of electricity. Power-to-gas (using electricity to generate methane from CO2) is also theoretically possible, but it’s expensive and very inefficient (about 20-30%). “Most products have no known way of being made with electricity or renewables” (p. 51).

After that, you’d have immense political problems in making the transition; any government requiring industry to decarbonize is going to see all of its industry flee to other countries that don’t have this regulation. It would take decades to make the transition, the steel-producing industries would be fighting you every step of the way, and it would drive prices up 60-90%.

And we haven’t even gotten to problems with finding materials to build the renewables. Most renewables require “rare earth” metals that are also finite, and are also needed for microchips and laptops; and renewables will require a massive expansion of the electric grid. To make renewables (like wind turbines and solar panels), you need manufacturing. But with all these issues, it may be virtually impossible to use wind turbines to power all of the process that manufactures wind turbines. We could at best reduce our need for fossil fuels, by generating our electricity renewably; but this would not eliminate all energy from fossil fuels.

Ding, ding, ding! We have a winner! It’s biomass! Yes, we can’t maintain our current civilization on biomass, but we can have some sort of civilization once we get our bloated human population numbers down to something reasonable. Friedemann doesn’t spell it out, but my guess is that a reasonable population level is something more like the total world population around the time of ancient Rome, the Middle Ages, or the dawn of the industrial revolution, when we really did have a “Wood World.”

Friedemann is thus led back to a consideration of land issues. The author doesn’t spell all of this out precisely, but this is what I am left with: land is the ultimate limit on civilization. Agriculture will need to be smaller. Horses and organic agriculture will power our food system; as industrial monocrops fade, and human population falls, soil erosion (currently massively unsustainable) will diminish. World population was about 1 billion in 1800, so that gives us a figure to start with. If the “Green New Deal” could  be birth control, we have a good chance to make it. After fossil fuels, thermal energy will be from biomass. Manufacturing will be limited to areas around large supplies of wood or near ports. We are going to use wood for steam engines to do work, and transportation will be mostly by ship, which will be cheapest and fastest, just as in the Roman Empire.

Hey, it’s not all doom and gloom. Climate change isn’t as much of a threat as we thought it was — the IPCC and scientists are generally assuming that we could keep extracting oil indefinitely, but this assumption is wrong (thank you, peak oil). We’re not going to be cooked! Or at least, we will be medium rare instead of well done.

More good news! The robots aren’t taking over! Robots presuppose manufacturing and rare earth minerals, and any remaining manufacturing will likely be dedicated to more practical things. Finally, the danger of a space alien invasion — while not completely eliminated — is much less than we thought. All civilizations require resources, without which — no matter how competent — they cannot reach an advanced technology. As on earth, so on other planets; they will burn through their supplies of whatever natural fuels and mineral resources are at their disposal. And that’s it; they have one shot at galactic rule, and once these resources are gone, it’s not going to happen.

So cheer up, everybody! We’ve solved the energy crisis and climate change, defused the population bomb, stopped the robot apocalypse, and driven back invading aliens from outer space. Not bad for a book of 207 pages!