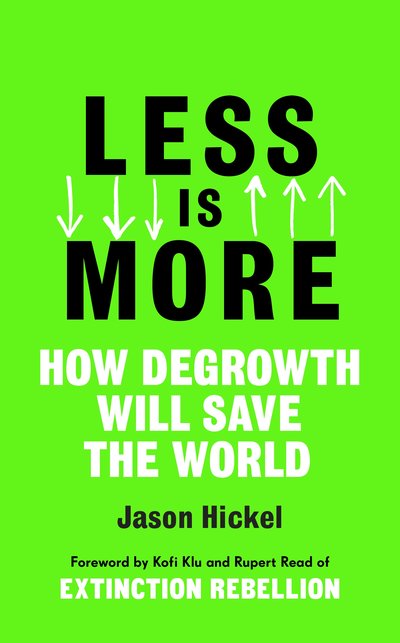 Less is More. How Degrowth Will Save the World. Jason Hickel. Windmill Books, 2020.

Less is More is an important book that seeks to popularize the idea of economic “degrowth,” though it is somewhat flawed in significant details. Degrowth is a deliberate attempt to reduce the physical size of the economy — for example, we should prefer bicycles to cars, and plant foods to animal foods. Degrowth is widely discussed in Europe, where the idea originated. In America, the “heart” of the capitalist beast, it is still a relatively unknown idea.

Jason Hickel is right on his key point in this book. Our economy is already massively unsustainable. If human civilization is to have a future, we cannot continue with the growth economy. This should be the starting point of any discussion about the environment.

Degrowth, politics, and the environment

For Hickel, the problem is capitalism, and the solution is degrowth. Capitalism is more than just “free markets.” It’s a force which depends on and requires economic growth. In the first two chapters, he traces the origins of this view back to our separation from nature in ancient times, manifested in the idea that humans should have “dominion” over the earth (Genesis 1:26) and Plato’s dualism.

He exposes the foolishness of “green growth” and “decoupling” (economic growth without an increase in material consumption). Most importantly, he outlines a number of specific steps as “pathways to a post-capitalist world.” Post-capitalist, in this case, means post-growth. These policies will be quickly recognized by students of ecological economics. (Kate Raworth endorsed this book!) They include cutting advertising, scaling back ecologically destructive industries, ending economic inequality, and expanding the sphere of common goods. These policies can achieve “significant reductions in material throughput” (substantially reduced resource use) “without any negative impact on human welfare” (p. 221).

In the final chapter he revisits some of the philosophical and ideological issues discussed in the first two chapters, and suggests the idea of a new social and economic paradigm based on the idea that “everything is connected,” learning from primitive tribes and from animistic religions.

First of all, for all the vegans in the audience, let’s talk about livestock agriculture. Well, I have great news: Less is More attacks the cattle industry! (He doesn’t, however, criticize other forms of livestock agriculture.) The beef industry is at the top of the list of “ecologically destructive industries” which could be “radically scaled back,” and “the [environmental] gains would be astonishing.” It’s right there on pages 219-220, and he devotes two entire paragraphs to the subject. There you go, vegans!

He also links economic inequality and ecological destruction: “any policy that reduces the incomes of the very rich will have a positive ecological benefit” (p. 186). I was a bit surprised, though, to find that he doesn’t mention a universal basic income, which elsewhere he champions.

What are the limits of our economy?

I have two problems with the book. (1) His program doesn’t go far enough; the economy he champions is better, but still unsustainable. (2) His discussions of the philosophical and ideological background of the growth economy misses the mark on several key points.

Hickel mentions, but never addresses in depth, the question of where the ultimate limits to growth are — either for agriculture, for industry, or for human population. He assumes that we must and will switch to renewable energy, and this is probably better than using fossil fuels, but is it enough?

A renewable energy economy still consumes resources. Renewables would require a “massive increase” in some forms of extraction (p. 141-145). There is an active debate over whether renewables can sustainably generate anything close to the energy required by our current consumer culture. (See Alice Friedemann’s Life After Fossil Fuels, the debate between Christopher Clack et al. and Mark Jacobson, Gail Tverberg’s blog Our Finite World, the recent book Bright Green Lies, and others.) Do we really have the resources to sustain even Hickel’s somewhat smaller industrial economy renewably? Or would sustainability also require reductions in human population? He leaves us guessing where his thoughts are taking us.

Eliminating the cattle industry is clearly a good thing, but would it be enough? Wouldn’t a sustainable agriculture need to drastically reduce or eliminate all livestock, not just cattle? Replacing cows with pigs or chickens (something which Hickel is ready to countenance on p. 219) would require increasing factory farms, crops grown for animals, and energy use for agriculture. This is hardly consistent with a philosophy in which (as Hickel puts it) “everything is connected.”

Perhaps this is the best we can do in 2021, given the current political climate. However, to me it is evident that we need much more. It’s not clear to me that renewables will be able to support even a substantial portion of our current energy use. We also need to drastically reduce or eliminate livestock agriculture; our agricultural system is already massively unsustainable. Irrigation from groundwater is indispensable to our current agricultural output; but most groundwater is irreplaceable. It is “fossil water”; when it’s gone, it’s gone. Soil erosion is even more serious; soil is eroding 10 to 20 times faster than it is being naturally formed. In the long run, agriculture is unsustainable even if everyone currently on the planet is vegan. We will have to go vegan and reduce population size.

Hickel isn’t content just to provide us with economic solutions to the environmental crisis. He wants to provide the philosophical background. Unfortunately this is probably the weakest part of the book.

Nearly half of the book is spent looking at the origins of capitalism in Western thought, and praising primitive cultures and their animistic, nature-oriented beliefs. He mentions the “dominion” passages in the Old Testament (Genesis 1:26), the Axial Age in which we saw the rise of the dominion ideology (p. 64), Plato (whom he says is dualist, p. 65), and the transition from feudalism to capitalism.

This oversimplifies and distorts history. Genesis has the seeds of a “dominion” ideology from Genesis 1:26, which Hickel rightly rejects. But the Hebrew Bible is a complex and contradictory document. It also has vegetarianism and compassion for animals from Genesis 1:29, plus later passages protesting injustice and the practice of animal sacrifice. Why pick one verse instead of another?

Describing post-1350 Europe as a “golden age” for Europe’s workers and ecology (p. 44) is peculiar. The transition from feudalism to capitalism in Europe had more to do with the Black Death and demographic pressures than any glorious working-class revolution. Yes, wages did go up and forests did recover. But the Black Death had just wiped out 50% of Europe’s population, and then the plague periodically recurred every few decades or so for the next 300 years, down to the Great Fire of London in 1666. Where exactly are we going with this lesson? Should we hope that some new plague will wipe out half of humanity so that we will improve the lot of the working class? Or perhaps the lesson is that we should try to reduce human population, a subject which he doesn’t directly address?

Even more problematic, though, is that he glorifies the animism of primitive cultures, and criticizes the Axial Age for promoting the idea of “dominion.” He’s got it exactly backwards on both points. The Axial Age in ancient Judaism did not produce Genesis: it produced the prophets Isaiah, Amos, and Hosea (among others), who critiqued the violence and injustice of early Hebrew society. Genesis was from an earlier period before the Axial Age. In Eastern philosophy, the Axial Age produced the Buddha whose “Son’s Flesh Sutra” Hickel quotes with approval in his Acknowledgments. The Axial Age thinkers are our friends; the problem is the earlier and more violent culture against which the Axial Age reacted.

Has he read Steven Pinker’s The Better Angels of Our Nature? Pinker’s popularization is well established in the scientific literature. Primitive humans were much more violent toward their fellow humans than modern humans. They were more violent, on a per capita basis, than humans during World Wars I and II, by an order of magnitude. Primitive humans were also, we might add, totally out of balance with nature. With just the tiniest sliver of today’s population, they wiped out over 3/4 of the biomass of all the large animals in North America, South America, and Australia (a fact which Hickel, to his credit, acknowledges). It’s only when humans started running out of things to kill that we turned from hunting to agriculture.

The Axial Age (800 BCE to 200 BCE) actually produced a decline in the scale of violence between humans (see Peter Turchin’s book Ultrasociety). The rise of large empires in China and Rome was only possible because of the acceptance of these new universalist ethical ideas from such Axial Age thinkers as Buddha, Pythagoras, Plato, and Confucius, who promoted the idea of cooperation among humans. By modern standards these ancient empires were not exactly apostles of nonviolence, but compared to the “constant battles” that came before, they were an important step forward, and everyday life became much less violent.

And, if you’re looking for an ancient author to express the idea of simple living in a political setting, you could hardly do better than Plato. In Plato’s Republic “the true state” was one in which people ate moderate vegetarian meals, “not begetting offspring beyond their means lest they fall into poverty or war” (see Republic 372). Hickel derides Plato, but Plato actually addresses both population and food limits much more directly than does Less is More. The proto-fascist state that eventually evolves out of the Republic is a consequence of the insistence of Glaucon (Socrates’ interlocutor in the Republic) on a “luxurious state.” Plato thus provides an indictment of the perpetual growth mentality. Arguably, it is the demand for meat and luxuries which causes the downfall of the ideal state. So I really have to take exception to his treatment of Plato and other Axial Age thinkers.

So there you have it. Less is More is an important book, though somewhat flawed. (There’s one other minor problem: it lacks an index.) Even though I am critical of some aspects of the book, in general it is spot on as to both the basic problem of modern civilization and the approach which we should take concerning the environmental crisis. It’s unfortunate that he has botched a number of the significant details that should emerge from a book on degrowth.

2 thoughts on “Less is More — review”