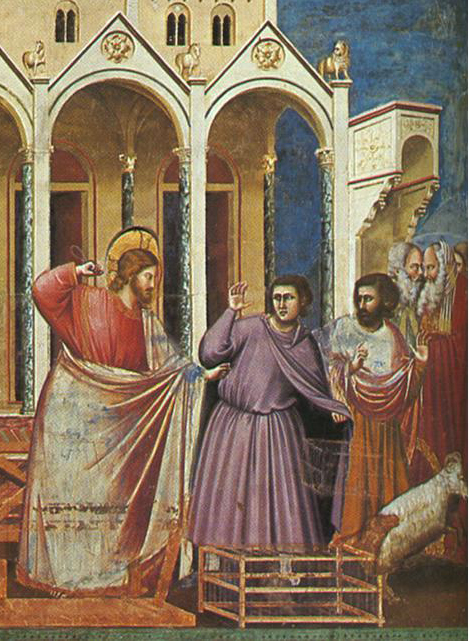 What does this imply about Jesus’ practice of compassion? Definitions of veganism vary, but the basic concept is not to kill or harm any sentient creature, especially for food. There is no word in ancient Greek or Latin for “vegan.” In fact, there was no word in English for it, either, before the first Vegan Society was formed in 1944. But the concept was present even in ancient times. It is roughly analogous to the ancient Sanskrit term “ahimsa,” referring to non-harming of sentient creatures, found in Eastern religions such as Buddhism and Hinduism. Veganism is not about purity; it is about compassion, “which seeks to exclude, as far as is possible and practicable, all forms of exploitation of, and cruelty to, animals for food, clothing or any other purpose,” as the Vegan Society puts it.

Was Jesus a vegan? The canonical gospels are contradictory and don’t help us very much. Jesus says that God does not forget even a sparrow; but Jesus also feeds fish to five thousand followers. The Jesus Seminar, representative of reliable scholarship, concluded that very few of the words attributed to Jesus in the gospels are historical anyway. But if we leave aside the gospels, where else can we turn?

In a short article, we can’t discuss this question with the thoroughness it deserves. (For a lengthy discussion, see my books The Lost Religion of Jesus and Disciples.) We can, however, discuss three key points relating to this problem: (1) the controversy over vegetarianism in the early church, (2) the testimony of Jewish Christianity, and (3) Jesus’ attack on animal sacrifice. All of these point to a single conclusion: Jesus and the early Christians rejected violence against animals, but the later church abandoned this teaching.

Controversies in the early church

The controversies over meat-eating and animal sacrifice in the early church indicate that the practice of compassion for animals was part of the original teachings of the early church, but was lost when it spread to the wider Roman world. The letters of Paul, written by a participant and eyewitness in the early church, give us the best explanation of this process. Paul and the leadership of the early Jerusalem church strenuously disagreed with each other on this subject.

Paul’s letters give us both sides of the argument. These are found in Galatians 1-2, Romans 14, and I Corinthians 8-10. In general, Paul believes that while vegetarianism is fine (and he even seems to be a vegetarian himself), it should not be a requirement for the entire movement.

In Galatians 1-2, Paul describes his angry dispute with James, Peter, and John. It’s not clear what the disagreement is about, but it has something to do with food (the “table of gentiles”). In Romans 14 and I Corinthians 8-10, Paul is more clear; the food issues are about animal sacrifice and eating meat. He maintains that it is perfectly all right to eat meat, even meat sacrificed to pagan idols, but he also counsels diplomacy in dealing with the vegetarians.

Eat anything sold in the meat market without raising questions of conscience. (I Corinthians 10:25).

Paul would not have raised this issue unless someone was eating only vegetables, and was raising questions of conscience about buying from the meat market. Paul’s statement indicates something more, though. Paul’s most likely audience was the wealthy Corinthians who could afford to eat meat on a regular basis.

The ancient Roman world was highly unequal and most people lived at subsistence level. Most people in the ancient Mediterranean world were mostly vegan most of the time; that’s all they could afford (see Andrew McGowan, Ascetic Eucharists, pp. 35-45). Meat-eating, or access to any animal products like cheese or eggs, would have been a casual expectation only for the rich. These were the people who could afford this sort of luxury on a regular basis.

The early Christian movement was a movement of and for the poor. But with Paul, the message had begun to penetrate beyond Jesus’ original audience and reach into the wealthier classes. This was both a harbinger of Christianity’s eventual success, and an indication that the original radical message was slowly being lost.

Paul knows this is controversial. So he advises the Romans to take care not to offend the picky eaters in the early movement:

Nothing is unclean of itself, but it is unclean for anyone who thinks it is unclean . . . Do not, for the sake of food, destroy the work of God. Everything is indeed clean, but it is wrong for anyone to make others fall by what he eats; it is right not to eat meat or drink wine or do anything makes your brother stumble (Romans 14:14, 20–21).

In fact, Paul writes to the Corinthians that he is willing to abstain from meat — not because of a moral issue, but just to avoid controversy:

For Paul’s opponents, giving up meat was not just a personal choice. It was part of the gospel message — good news for the animals. Interestingly, there is one thing that Paul doesn’t say. He never says that Jesus himself ate meat. At the time Paul wrote, there were many people alive who had known the earthly Jesus. If Jesus had eaten meat, Paul could have settled the argument in an instant: “how can you object to eating meat, when our Lord himself ate meat?”

The Testimony of Jewish Christianity

Let’s fast forward a few centuries and look at the situation within the early church in the second, third, and fourth centuries. The later Jewish Christian Ebionites (ebionim = “the poor” in Hebrew) were a group of early Christians loyal to the Jewish law, as interpreted by Jesus. They also despised Paul, rejected animal sacrifice, and didn’t eat meat. In other words, they inherited the views of Paul’s vegetarian opponents in the early church.

We know about the Jewish Christian Ebionites from several sources: from fragments of their gospel, from descriptions of their beliefs by the early church fathers who attacked their ideas, and from two early documents either written by or heavily influenced by Jewish Christians: the Clementine Homilies and the Recognitions of Clement.

The Ebionites said that Jesus had come specifically the abolish the animal sacrifices. The Ebionites were vegetarians and refused to eat meat. To eat “dead flesh” is to eat at the table of demons (Homilies 7.4, 7.8), and in the Homilies and Recognitions, followers of Jesus are counseled to avoid eating at the table of demons. They despised Paul, considering him an apostate from the law, and identified with Paul’s opponents in the early church — James, Peter, and John. They believed that James the brother of Jesus (not Peter) was the leader of the early church. James was universally acknowledged to be a strict vegetarian, and in fact was raised as a vegetarian (Eusebius, Ecclesiastical History 2.23.5-6).

James’ views were likely normative in earliest Christianity. James also refused to wear wool, so this was more than just a question of diet. Early Christians were repelled by the public displays and killing of animals in the Roman Coliseum, which would sometimes feature combat with and killing of many animals (and humans). They objected to the “the madness of the circus” and “the atrocities of the arena” (Tertullian, Apology 38). Tertullian notes that the Christians “have not even the blood of animals at their meals of simple and natural food” (Apology 9), folding the objections against killing animals and against killing people together in a single vision of nonviolence.

For the poor, who could not afford to eat animal products in the first place, the main “temptation” to eat meat would have come at festival times, when the common people would have had access to sacrificed meat. This makes the Jewish Christian view opposing animal sacrifice highly significant. In the gospel of the Ebionites, Jesus indignantly rejects the Passover meat, and attacks animal sacrifice, saying:

I have come to abolish the sacrifices, and unless you stop sacrificing [animals], my wrath will not stop from you. (Epiphanius, Panarion 30.16.5).

Does this description accurately describe Jesus? One of the few incidents found in all four gospels is that Jesus did try to “abolish the sacrifices”:

John places the incident in the temple at a different time, but elaborates more fully on the event itself:

In the temple he found those who were selling oxen and sheep and pigeons, and the money-changers at their business. And making a whip of cords, he drove them all, with the sheep and oxen, out of the temple; and he poured out the coins of the money-changers and overturned their tables. And he told those who sold the pigeons, “Take these things away; you shall not make my Father’s house a house of trade.” (John 2:14–16)

Jesus’ anger specifically targets the buyers and sellers of animals. The practical effect of this confrontation was to disrupt the animal sacrifice business — chasing out the animals to be sacrificed, as well as those who were buying or selling them. “Cleansing the temple” was an act of animal liberation.

This act demonstrates Jesus’ compassion for the animals more clearly than any of the teachings of the modern church. In modern terms, Jesus was a vegan. If we are to be true to the spirit of Jesus’ teachings, we must make it our mission to spread this message of compassion far and wide.

NOTE: this is an updated and somewhat lengthier version of a post from last March. This new version has also been published on Medium.