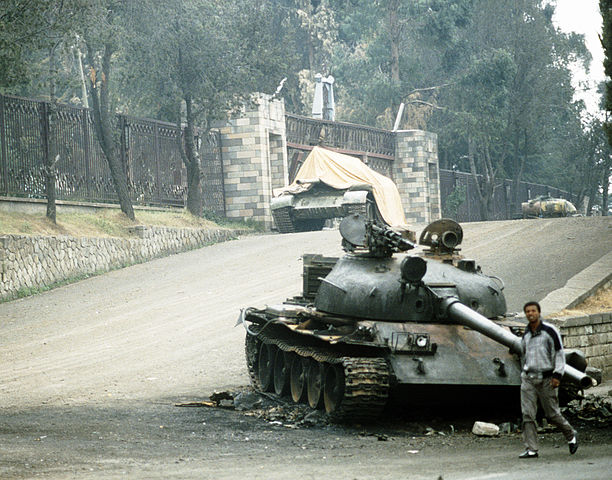 The recent impeachment fiasco has drawn further attention to the rise of instability and polarization in the United States. In Ages of Discord, Peter Turchin predicted that this would continue. In his blogs, he states: “In my opinion, the greatest danger for us today (and into the 2020s) is not the rise of a Hitler, but rather a Second American Civil War. . . . we are already in a Cold Civil War.” Turchin foresees “rising instability in the USA, probably peaking with a major outbreak of political violence in the 2020s.”

What’s driving all this? Do we need to resolve to be nicer to each other, or what?

In Turchin’s view, this instability is not the result of moral failings. It is the result of structural and economic factors. In Ages of Discord, Turchin sees the history of the United States since 1930 as resembling the social history of the United States before 1930. Our recent history also broadly resembles the history of England, France, Russia, ancient Rome. In each of these cases, intra-elite competition led to violence. This, in response to similar demographic pressures, is exactly what happened during the Wars of the Roses, the English Civil War, and the American Civil War.

For Turchin, what are the forces driving instability in the contemporary United States? 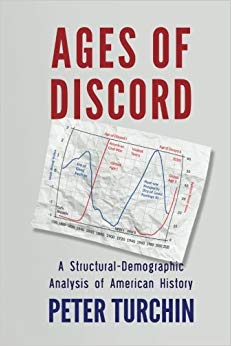 1. “Popular immiseration” — translation, things are getting worse for the average person. This means that people are increasingly restless and easy to mobilize. The situation of the average worker has hardly changed since 1980. The average relative wage (your salary divided by the GNP) has plummeted. Unfortunately, bad news for the average worker is a good thing for the elites (due to declining labor costs).

2. Intra-elite conflict. We have increasing numbers of elites. There are more millionaires, billionaires, lawyers, and MBAs. But there are only so many elite positions at the very top: members of Congress, Supreme Court justices, and mega-big corporate structures like Facebook and Amazon.

3. State fragility. Twenty years ago, “national debt” was a big issue. Now, debt is expanding beyond all reason and it’s not even an issue. The state can’t really raise taxes because the average workers are already unhappy. You can’t raise taxes for the elites either, because they’re, well, running things.

4. Finally, there is the instability principle. It is easy to mobilize the masses (they are unhappy), there is a lot of incentive to do so (increasing intra-elite competition), and there’s nobody able to really police the situation (state fragility).

What’s really novel about Turchin’s view is that “popular immiseration” does not, in and of itself, produce a revolution from below. As long as the elites remain united, they can almost always put down a popular revolt, whether of the electoral or the illegal variety. What popular immiseration does is give some elites a cheap source of labor to extend their empires. It gives other elites, or counter-elites, some material to work with in order to mobilize popular opinion for their own purposes. If Americans were basking in prosperity, Fox News would have a lot harder time of it.

The potential for violence does not come from average workers; it comes from conflict between the elites. As we saw in the recent impeachment process and in Trump’s State of the Union message, the elites are transparently not united. Political norms are deteriorating. Trump gives a noted right-wing demagogue the Medal of Freedom; Pelosi rips up Trump’s speech.

All of Turchin’s points could be debated, but the evidence looks pretty good to me. In fact, there is another factor here, which Turchin doesn’t discuss: resource and environmental issues. Resource depletion makes all of these problems worse. There is no way we can effectively deal with climate change — let alone peak oil, mass extinctions, or soil and water depletion — without altering lifestyles and culture. Resource depletion (including “climate change” in this category) tends to reduce the average person’s prosperity, makes economic growth more difficult or impossible, further aggravates intra-elite conflict, and makes the stability of the nation more precarious.

Most people tend to dismiss peak oil as a problem these days, but there is no reason to do so. We’ve been kicking the can down the road, extending literal or implicit subsidies to the fossil fuel industry for over a decade, to avoid confronting it. Bush invaded Iraq, Obama tried quantitative easing, Trump is trying to expand drilling. Investors in the fracking business, who will eventually be caught short when the shale oil bubble collapses, are also providing temporary support. Why would we doing this, if there was lots of cheap and easily produced oil?

We need reality-based discourse. The underlying problems driving conflict are vast inequality and resource depletion. Republicans and Democrats inhabit different factual realities in which the other side are evil liars. In the meantime, our problems with climate change and peak oil are not easily solvable, and solving them will likely infringe on some of our elites (the fossil fuel industry and the financial sector, at least).

We sometimes hear comments that “America is deeply divided” — and of course it’s the other guy’s fault! But actually, it is not America that is deeply divided — it is the elites who are deeply divided. The odds are still against the possibility of violence during (or as an outcome of) the 2020 election cycle. But a civil war or some kind of lesser political violence is now thinkable, and the pressures for a violent resolution are increasing.

5 thoughts on “Are we headed towards a civil war?”