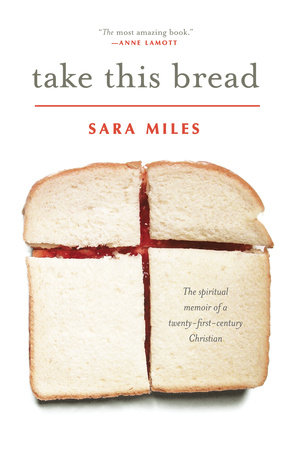 Take this Bread is an absolutely marvelous book. O. K., the author isn’t vegetarian (more about that later), but this book really conveys, better than anything else I’ve read recently, what it means to be a “believer.” If you want to get into Christian mysticism (a term that I do not recall she ever uses), but can’t handle St. John of the Cross, I’d really take a look at this book first. Belief is not something that happens to the mind, as if you have a vision of Jesus out of nowhere saying “hey, believe in me, already,” or read Thomas Aquinas and discover that he really does have the long-sought-after knock-down proof of God’s existence.

Spirituality is something that happens somewhere else. Sara Miles locates it in the body, and what appeals to her about Christianity is the “physicality of spirituality.”  She’s the one who should be debating atheists such as Sam Harris and Richard Dawkins about spirituality and religion.  She is aware of and condemns all the cruelties committed in the name of religion, but also believes in the right to have a sense of mystery in one’s life.

Sara Miles has impeccably liberal/left credentials. She was a journalist in Central America, a lesbian and a mother, with atheist parents, with work and interests in the restaurant business, with a thoroughly secular background. Then she wanders into a church one day, more or less by chance, and takes communion, and her life changes. What actually changes? She’s still liberal, she’s still lesbian, she’s still intensely interested in food. But it’s clear that something very deep within her has changed. She gets involved in setting up a food pantry at her church, an outgrowth of her continuing interest in food. Most of the rest of the book tells the story of her interactions with her church, as they and she sometimes cooperate and sometimes struggle with each other to determine what exactly their mission is.

I recommend this book because it is well-written and because it conveys, well, the physicality of spirituality. I have two responses to this book (besides generally recommending it), one concerning vegetarianism and the other concerning her statement that “you can’t be a Christian by yourself.”

When she says “you can’t be a Christian by yourself,” she unfortunately has a valid point. The spiritual journey is made immensely easier both by teachers and by supporters, however imperfect they may be. However, I do not agree that it is impossible to be a Christian by yourself. If you did, then Christian vegetarianism would be virtually impossible. There is no church of any significant size that accepts ethical vegetarianism — indeed, even both the Seventh-Day Adventist churches and the Christian Vegetarian Association distance themselves in subtle ways from the idea that it is “wrong” to eat meat (though there are individual members of these groups who take this position). It takes courage to be different, but it is possible. Those take upon themselves the same mission that Jesus had in the temple — to abolish torture and cruelty in all its forms — must essentially do this very thing.

My major concern concerns a relatively small point in her scheme of things, namely what is on the table. She is very sensitive to the hunger question, which is good. But she is apparently completely oblivious to the whole vegetarian question. She doesn’t dwell on meat, and there is very little here that is obviously repugnant to vegetarian sensibilities, but it becomes clear about halfway through the book that she doesn’t have any particular concerns about the non-human world. So I kept on reading and admiring the book even though I constantly held this mental caveat in mind.  Her heart is clearly in the right place; on the basis of her faith, and on the basis that she was fed even though she was a stranger, she wants to feed others.

One odd thing about the food pantry, which I don’t think she is conscious of, is that the food which St. Gregory’s distributed was apparently mostly vegetarian. She doesn’t give enough details for me to conclusively verify this, but the description of the first day of the food pantry goes like this:

Thirty-five people showed up on the food pantry’s opening Friday to get groceries . . . Steve Hassett and I had laid out the prettiest altar cloths on some folding tables and stacked them with celery and apples and potatoes. There was a table for Cheerios, one for ramen noodles, and one by the door piled with loaves of sandwich bread. “It smells good in here,” Donald said, walking in and sniffing. “Like a grocery store.” (p. 121)

But when she describes the food that she fixes for themselves, it unapologetically features meat of some sort. For anyone with vegetarian sensibilities, there is more of such irony throughout the book.  In a country in which 90% of all agricultural land goes for livestock agriculture, an incredibly wasteful practice, wouldn’t we feed many more people on a vegetarian diet?  She is aware of the other wastefulness in the food system (food being plowed under or thrown away because it’s cheaper to do so than bring it to market); what about this much larger, huge wastefulness of meat consumption?   If we took all the plant foods grown in in the United States for human food and dumped it all into the ocean, it wouldn’t be as wasteful as American livestock agriculture.

She is clearly aware of the animal-sacrifice connections of the Eucharist — Paul at one point says “Christ is our paschal lamb.” Towards the end, when she is about to tell her mother that she’s a Christian, she sets the table with bread and wine and lamb. “It still didn’t occur to me what I was doing, or what a ridiculous pun I was stumbling toward with my pan-seared Lamb of God–much less that I was invoking sacraments,” she says (p. 277).

My question is, how does she think those lambs got to the table? Didn’t the practice of animal sacrifice, the Passover lamb, the “model” for this interpretation of Jesus’ death, involve torture just as much as modern factory-farmed lamb?

The last time I took communion of this sort (in the 1980’s), was a moment of minor epiphany for me, but of a rather different sort than occurred for Miles. I had become vegetarian and was trying to recover some sense of Christianity. I grew up in a Baptist Church where the service was described as “communion,” rather than Eucharist, and the main childhood memory I carried from it was “do this in remembrance of me” (words inscribed on the altar).

So it was something of a shock when at this communion service I was handed the white wafer and heard the words, “body of Christ.” I vowed that from that moment on that I would never again take, even symbolically, the body or blood of Christ to eat. It was an emotional reaction on my part to what I know about the ghastly way in which billions of animals are treated. I wasn’t interested in eating bodies, and I saw no reason to eat symbolic bodies either.

This symbolism is at its basis anti-Christian. It is based on the idea of animal sacrifice, which Jesus objected to (“I require mercy, not sacrifice”). In fact that is precisely the sort of objection that Jesus was expressing when he went into the temple and disrupted the animal sacrifice business: “In the temple he found those who were selling oxen and sheep and pigeons, and the money-changers at their business. And making a whip of cords, he drove them all, with the sheep and oxen, out of the temple.”

What does she think the destination of all of those oxen and sheep and pigeons in the temple was? They were to be animal sacrifices — the ancient temple was more like a slaughterhouse or a butcher shop than a modern place of worship. If Jesus disrupted the actual animal sacrifice business, why should we “remember him” by commemorating the very activity which he died trying to obstruct?

Sara Miles actually gives a fairly convincing and non-cannibalistic interpretation of the idea of the Eucharist, or “eating Jesus.” The true analogy is the baby in the mother’s womb who “eats” the mother. The “eating” occurs in the sense that the baby does take part of the mother’s body as nourishment. So in a similar way we “eat” Christ — we are growing in the womb of God, so to speak. Now I like this interpretation. But essentially it is a revision of the evil side of Judaism and Christianity. Miles is coming down “on the good side of evil,” as one of her characters says of their role in the food business.

I know what the likely response to all this — isn’t bringing up vegetarianism just creating a new exclusive “club” of those who are more “pure”?  I’m sensitive to this issue, and I’m not sure that I’m ready to say that it isn’t possible to be a Christian if you eat meat. We need to accept people where they are, and moral perfection is obviously not always possible. What I do challenge, however, is the idea that someone who regularly eats meat can claim to be “radical.”